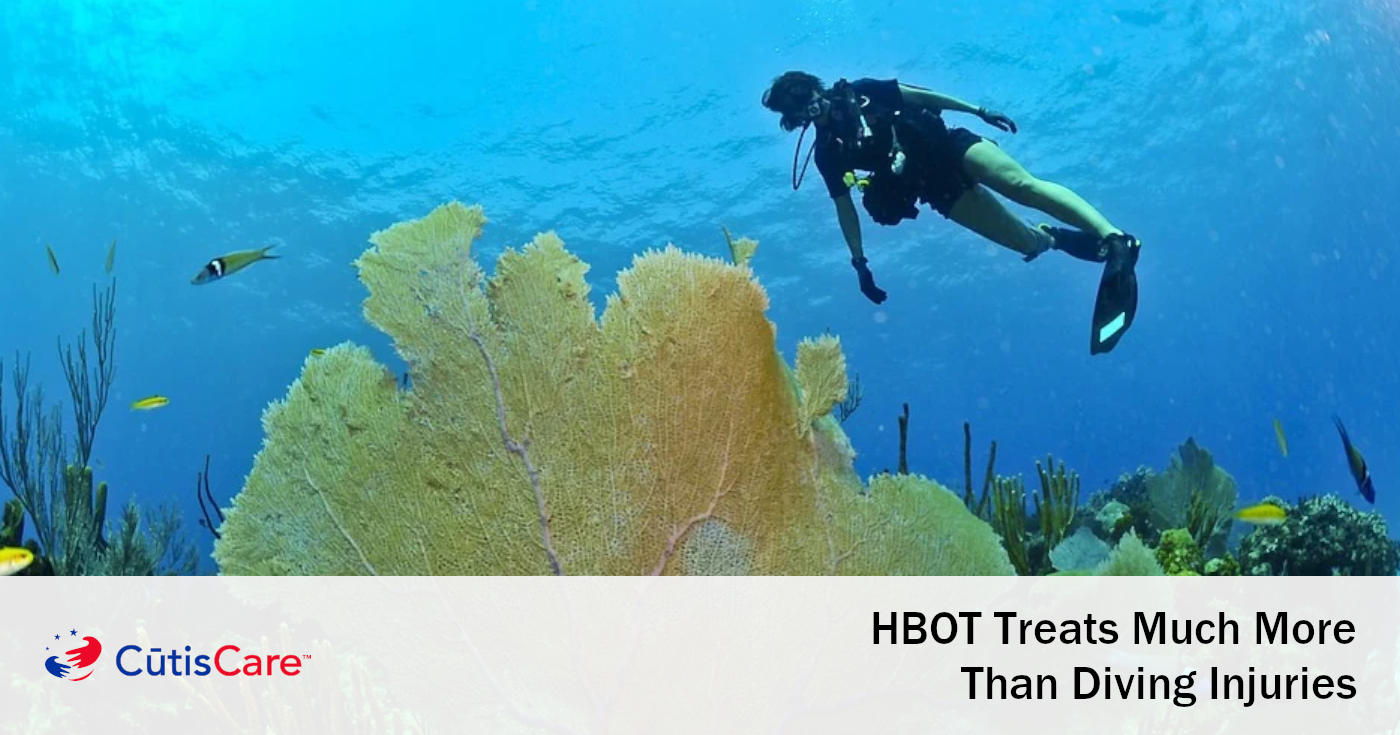 CūtisCare has been on the cutting edge of hyperbaric oxygen therapy (HBOT) indications for decades, partnering with many hospitals across the country to establish successful wound healing centers. The benefits of HBOT and its wound healing properties are sometimes lost on the average patient as they associate HBOT with diving injuries. Here, CūtisCare discusses all of the uses for hyperbaric oxygen therapy, and why adding a wound care center to your hospital or clinic could potentially help thousands of patients dealing with persistent non-healing wounds, diabetes, and even circulatory issues.

One of the earlier uses of HBOT was to treat diving-related complications such as decompression sickness. As medical professionals began doing more research into this treatment, they discovered that it could potentially help with other issues, from diabetic foot ulcers to circulation problems. These issues could be either acute or chronic, but various studies have shown that the increased intake of oxygen as a result of the pressurized 100% pure oxygen in HBOT can help the body’s healing response for much more than diving injuries.

Below are several success stories illustrating HBOT’s potential to alleviate the severity of some complications. Names have been changed to ensure patients' privacy.

One of the more well-studied applications of HBOT is in the use of treating diabetic foot ulcers, which occur in approximately 15% of people who have diabetes, according to the American Podiatric Medical Association. Diabetes can create nerve damage and decrease capillary efficiency, leading to circulation issues. These two factors combined can create numbness in lower extremities and make it harder for patients to identify when they are developing foot ulcers. Because HBOT raises blood oxygen levels, it can promote better circulation and treat the root cause of diabetic foot ulcers. Doctors may also use HBOT for wound care to speed the healing process.

A patient named Robert came in for HBOT with an ulcer on his big toe. Due to the aforementioned numbness and nerve damage as a result of poor circulation, he could not sense the pain of the ulcer and continued to put weight on it. The ulcer became infected and eventually affected his bone. Without immediate treatment to reverse this, he was at risk of needing an amputation.

Robert began receiving wound care and HBOT treatments for the duration of several months. Over the course of the treatment, which involved approximately 40 HBOT sessions, he showed significant improvement. HBOT slowed tissue death and improved his circulation in the area, helping with the underlying issue of restricted blood vessels and diminished vascular capacity. Most importantly, Robert managed to evade amputation.

After undergoing intensive radiation therapy, often for pelvic cancers, some patients may suffer from a painful side effect: radiation cystitis. This can cause inflammation and tissue damage to the bladder. Radiation cystitis can manifest shortly after radiotherapy, or it can take more than six months before the onset of symptoms, which can include increased frequency of urination, pain, and sometimes bleeding. HBOT can induce angiogenesis, which is the formation of new blood vessels, in order to deliver blood and oxygen to areas where damaged tissue needs to heal.

John was looking for a solution to his ongoing complications from radiation cystitis that standard treatments did not cure. He was experiencing bleeding and received a referral from his urologist for HBOT. After some uncertainty about the of efficacy of HBOT and concerns about being in an enclosed space, John eventually signed onto the idea.

He reported that his bleeding was slowing after three weeks of treatment. Once he completed 40 rounds of HBOT, the bleeding stopped entirely. His urologist examined his bladder after those 40 treatments and discovered the tissue had greatly recovered.

Nancy was barely conscious and unable to communicate when she arrived for treatment. Immediately we started her on a course of seven HBOT treatments on a twice-daily basis. The carbon monoxide had already reduced her cognitive and physical capabilities, but we sought to reverse this. After her fourth treatment, she was able to lift both arms and smile at us, whereas even an hour before she couldn’t. Three days after arriving with debilitating carbon monoxide poisoning, Nancy was discharged. Within a week, she could walk by herself and could press play on her life again.

Necrotizing fasciitis is a flesh-eating disease that occurs when bacteria infiltrate the body and cause an infection that can be life-threatening. The bacteria can enter the body through open wounds or sores and cause tissue death. Medical professionals have analyzed HBOT as an adjunctive treatment for necrotizing fasciitis, alongside antibiotics, wound care, and sometimes surgery. In severe cases, a limb may need to be amputated in order to stop the infection from spreading.

Wendy received a minor injury at school that developed into a rapidly progressing infection that traveled from her hand up her arm. She immediately began receiving a course of antibiotics and twice-daily HBOT sessions, in addition to several operations. Even after the first few oxygen therapy treatments, the infection’s spread slowed. By the end of her treatment, she lost some functions in her finger and hand muscles, but ultimately kept her hand and arm.

If you are a medical professional curious as to how HBOT can improve your facility and help your patients, contact CūtisCare today at 561-289-6827.

If you are a patient, visit CūtisCare’s location finder to locate a Wound Healing and Hyperbaric Center near you.