The Benefits of Hyperbaric Oxygen Therapy for Late Effects of Radiation 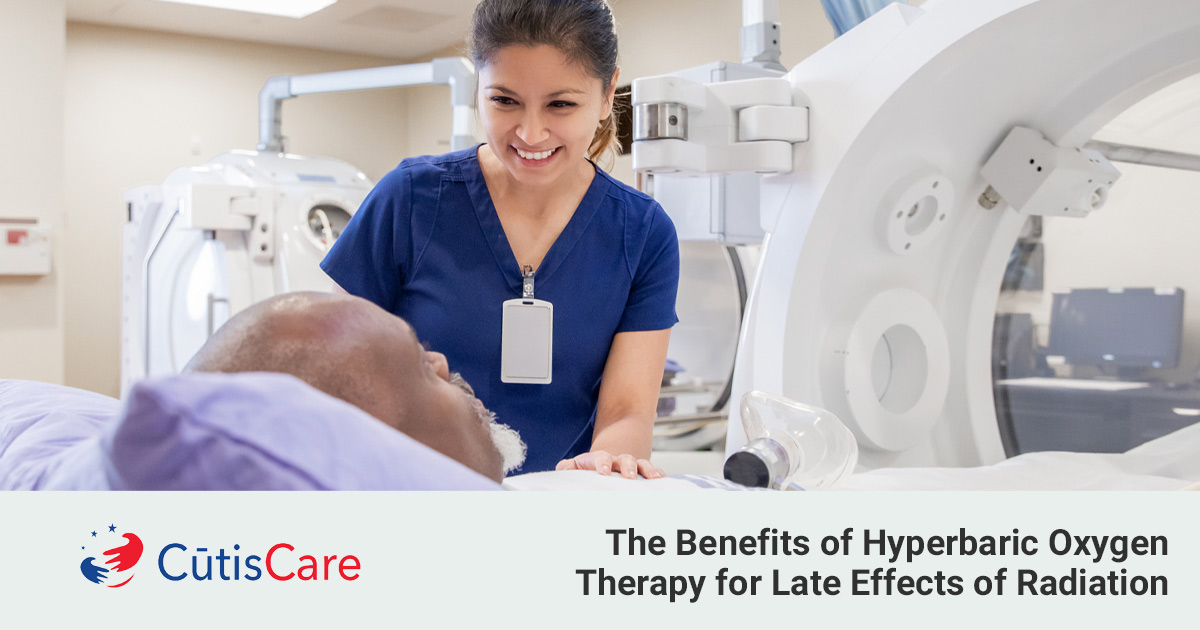 The Benefits of Hyperbaric Oxygen Therapy for Late Effects of Radiation

Radiation therapy is a common and highly effective treatment method for many cancers. And, as with any medical treatment, it comes along with side effects. One research study reported that serious radiation complications occur in 5% of patients receiving radiation therapy. In this post we’ll explore radiation injuries and side effects and consider how hyperbaric oxygen therapy, often referred to as HBOT, can aid in the healing process.

What Is Radiation Injury?

While radiation therapy destroys cancer cells, it has the potential to damage otherwise normal tissue in the vicinity of the treatment area. Clinicians refer to this overall group of conditions as cutaneous radiation injury (CRI).

The skin, as well as underlying tissue, is particularly sensitive to radiation injury. These skin injuries, including a condition called radiodermatitis (or radiation dermatitis), is on the rise.

“Radiation injuries solely to the skin in interventional procedures have been increasingly reported since the 1990s,” Sadanori Akita, MD, PhD, writes in his Advances in Wound Care journal article, “Treatment of Radiation Injury.”

A skin radiation injury can appear in many forms, from blistering and flaking to deep, secreting ulcers. Other areas prone to radiation injury include those associated with cancers of the brain, breasts, anus, and soft tissues.

While radiology departments often manage pain and injuries associated with radiation therapy, in many cases, especially those involving complex sores, a patient could be referred to a surgeon or specialized wound clinic for a radiation injury.

What Are Late Effects of Radiation?

In addition to injuries that occur early in someone’s radiation treatment, others take longer to develop. For instance, some tissue damage remains undetected for a long time. Aptly referred to as “late effects of radiation,” these can also include:

The CDC reports that late effects of radiation can come months to years after the initial exposure.

Before we look into how HBOT helps in cases of radiation injury or late effects of radiation, we’ll give an overview of the therapy itself.

What is Hyperbaric Oxygen Therapy (HBOT)?

HBOT, perhaps best-known to the general public for its association with helping deep-sea divers recover from being underwater, is a treatment that exposes the patient to 100% oxygen. Aside from decompression sickness, in its earlier uses, HBOT treated carbon monoxide poisoning.

The hyperbaric oxygen chamber was developed to provide this pure-0₂ therapy in a safe healthcare setting. Typically a room in itself, the HBOT chamber is an immersive environment where 100%, pressurized oxygen is delivered to patients. Depending on the size of the chamber, more than one patient can be treated at once.

Our previous blog post, “How Hyperbaric Oxygen Therapy Is Used” offers an in-depth look at the many ways HBOT can help wound care patients and what they can expect during an HBOT treatment session.

About one-third of patients in the United States who’ve received hyperbaric oxygen therapy were being treated for late effects of radiation therapy. As we’ve shared, HBOT is successful in treating and healing a variety of complex wounds, including thermal burns, necrotizing infections, compromised grafts and flaps, soft tissue or bone injury, ulcers, and other indications. But why and how does it work?

Oxygen is necessary to the wound-healing process in many ways, including:

HBOT proves its versatility with the growing body of research surrounding its additional benefits. For example, one study of late effects of radiation showed improvement of symptoms after HBOT was noted in 75% of head-and-neck, 100% of pelvic, and 57% of “other” subjects  Bone and bladder symptoms were most likely to benefit from HBOT (response rate, 81% and 83%, respectively).

Radiation therapy has helped cure cancer in millions of patients; yet, while cancer-free, many will later struggle with its adverse side effects; and more and more people are seeking HBOT to heal from radiation injury.

How CūtisCare Can Help Your Wound Healing Center Expand into HBOT

CūtisCare is on the cutting edge of hyperbaric oxygen therapy — and has been for many decades. We’ve helped leading hospitals and healthcare groups across the nation implement HBOT into their existing wound healing programs. We’d love to tell you more: call us at 561-289-6827.

(If you’re a patient or caregiver looking for hyperbaric oxygen therapy treatment near you, visit our location finder.)